Having now put the first 2000km on my Giulia, across city, motorway, and twisty Alpine road, here are some first impressions and comparisons with the late lamented Beast. 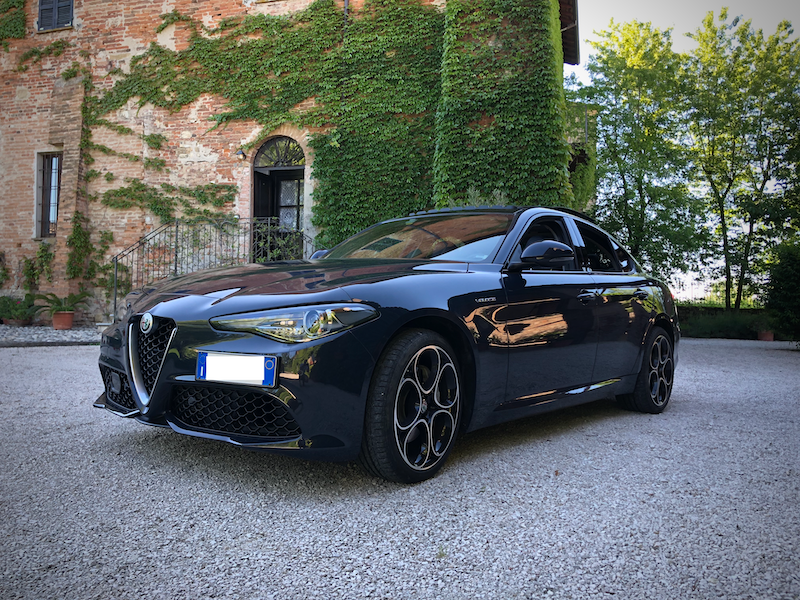 Quite apart from all the differences inherent in going from a lardy SUV to a lithe sports saloon that weighs about as much as one of my old Cayenne’s doors, there is also more than a decade of evolution separating the two cars, so there are all sorts of changes to take into account. Overall though I am just so happy with my choice; the thing looks just perfect, subtle but aggressive, a brawler in an impeccably tailored Italian suit. The gamble with the paint colour paid off, despite looking nothing like the picture in the online configurator! It shifts between grey and blue, with bronze accents in the sunlight, and looks far better than that description – although the full effect doesn’t quite come across in pictures.

The Giulia also manages to pull off that trick that 911s have of feeling special even at parking speeds, and keeps it up all the way to the rev limiter – not that I have explored that too much yet, as I wanted to run the motor in somewhat gently. The good feeling is due in no small part to the mass of the engine being entirely behind the line of the front axle, contributing to that perfect weight distribution.

The lightness and sensitivity of the steering are a huge part of this "specialness", but it’s a feeling that is woven throughout the car, from the way the instruments are angled towards the driver, to the seats that offer a perfectly judged combination of comfort and firm bolsters holding you in place. The DNA modes also help, with a switch into Dynamic feeling like a shot of adrenaline straight into the driver’s veins, vision turning red at the edges in sync with the instruments.

I did miss the air suspension from the Beast on some of the broken cobbled surfaces in Milan, but apart from that I far prefer the Giulia’s sporty setup, which even in standard mode appears to have deep-seated religious objections to any roll in the body. In sport mode it adds a well-judged firmness without becoming crashy – in other words, it’s still comfortable on the straights, and then sends the car around corners absolutely flat.

Mostly my impressions from the test drive were confirmed in spades. It’s a taut, agile car; the engine is very willing even in automatic mode, but also rewards use of the paddles. A four-cylinder engine is inherently never going to sound as good as a V8, but the Beast was not especially vocal, while I suspect the Alfa team had a few meetings with the team that tunes the exhausts over at Abarth. It’s not nearly as bombastic as those little 500s, but the Giulia’s twin exhausts still manage to sound pretty fruity when you push on a bit.

One place where the Chrysler part of Fiat-Chrysler shows through is the very American-sounding beep which goes off if you change lanes without indicating. The lane departure warning can easily be turned on and off from a button on the end of one of the stalks, which is a very Italian touch that is convenient on a twisty mountain road where you're frequently crossing back and forth across the centre line.

There is also radar cruise control, which does a pretty decent job of keeping its distance from traffic. It could be better, as while the distance is adjustable, even the minimum distance is still quite far away, especially by the standards of Italian motorways. The system is also quite eager to drop a cog to accelerate back up to speed, which is not necessary at all. When I’m on the cruise control, by definition I’m in no hurry! Anyway, this feature is mostly helpful, but only with light traffic. In even moderate traffic, it’s too eager to back off, then surge back up to speed – not very relaxing.

The same radar sensor also drives a forward collision warning system, which, yes, I have already heard triggered. I was already braking, but it automatically activated the hazard lights when the warning fired, which could be useful when doing a full emergency stop.

The dashboard screen is gorgeous but not touch sensitive, which is initially disconcerting when trying to navigate CarPlay. After a month of use I think I actually prefer doing it through the clickwheel, as it’s much easier to get things done without taking my eyes off the road. The usual steering wheel buttons also help, with play/pause, cue, and volume buttons all present and correct. The other two ICE-related buttons are used to hang up on a call, and to trigger Siri, so I don’t really miss touching the screen at all.

On that note, it is so good to have physical controls in the cabin for functions like climate control. I don’t need to take my eyes off the wheel to make it cooler or warmer; there is a lovely tactile wheel that I can twist around a little or a lot, and know right away whether my action was registered. There’s also a physical control between the seats for the ICE, with volume, play/pause, forward/back, and screen off functions – very useful for the passenger, while the driver is probably best served using the steering wheel controls.

Bottom line, I absolutely love my Giulia. If you’re in the market for something similar, I highly recommend it. If you’re not up for the Veloce setup that I got (or for the full-beans Quadrifoglio monster!), you can get most of the same goodness on the Super, with the same two-litre motor in a milder 200bhp tune. Take a test drive, you won’t regret it!