I was reading an interesting blog post about working from home, by Julia Evans. I also work from home, so it was interesting to compare my experiences of remote work with hers.

The two main benefits are the obvious ones – I get to live where I want (Montreal) and have the job that I want. And San Francisco tech companies in general pay a lot more than Montreal tech companies, so working for a SF tech company while living outside SF is great.

I can confirm this 100%. I live in Italy rather than in Canada, but the same factors apply: I’d rather be here than there, and the salary is very competitive with what I could make locally.

True! I hated working in an open-plan office, and wore headphones a lot so that I could get some peace and quiet. It did not help that none of my team were in that office, so I was only going there to satisfy some HR mandate.

Ha. Nnnope – I still have my alarm set far too early every weekday to take the kids to school. On the other hand, I can have breakfast with them and take them to school, and still get a full day of work in in. Part of that is down to time zone shift, which is both good and bad; more on that later.

Yes! My team is spread out across four sites and three time zones, and so are many other teams, so there isn’t the sort of downside to being remote that there can be if it’s an exception.

I haven’t tried this one (those kids and their schools again), but I know other people who’ve done it very successfully. This also works if your area of coverage gets large enough. I knew someone who was in charge of one particular technology alliance partner across the whole of EMEA, which meant that he spent a lot of his time flying. Soon, he realised that this meant he didn’t have to be anywhere in particular, as long as he was near an international airport – so he decamped to Barcelona for a year. Why not?

I am shifted a lot more than that: the difference from Italy to San Francisco is nine hours. The upside is I get a nice quiet start to my day to read, write, and think, and then the US wakes up and I start getting into conference calls. The downside is that there are only a few usable hours of overlap in our schedules, so compatible time slots go quickly. Sometimes you have to do careful triage of what actually needs an interactive voice call, and what can be discussed asynchronously over email or Slack. I make it a hard rule to keep family dinner time free, but I do take calls after dinner several times a month, when we can’t work out other slots.

That last point is important: I joined a team that had previously been able to shout across a table at each other, and suddenly half the team was remote. We had to figure out how to communicate and manage projects across the time zone gap, and there were some stumbles and false starts along the way.

What we ended up figuring out was that different channels work for different tasks. Perhaps not revolutionary, I know, but we took the time while we were all together in person and thrashed it out with a whiteboard: what type of requests should go to which channel, what response times could be expected, and so on.

This is what is known as a "communications charter", and is recommended by HBR for virtual teams:

Communication on virtual teams is often less frequent, and always is less rich than face-to-face interaction, which provides more contextual cues and information about emotional states — such as engagement or lack thereof. The only way to avoid the pitfalls is to be extremely clear and disciplined about how the team will communicate. Create a charter that establishes norms of behavior when participating in virtual meetings, such as limiting background noise and side conversations, talking clearly and at a reasonable pace, listening attentively and not dominating the conversation, and so on. The charter also should include guidelines on which communication modes to use in which circumstances, for example when to reply via email versus picking up the phone versus taking the time to create and share a document.

Get In Their Face

Note that when we were working out our communications charter, we did it with a whiteboard. This is because we made it a goal to get together in person once a quarter or thereabouts. Don’t skimp on this! It’s not cheap: airfare, hotels, and meals all add up. However, the time you spend together face to face will pay off over and over. There is so much that gets done when the team is together, and the benefits continue after the remote team members fly out, because that face time has strengthened relationships and clarified questions.

In fact, face time is so important that it’s the very first point in that HBR list:

It may seem paradoxical to say in a post on virtual teams, but face-to-face communication is still better than virtual when it comes to building relationships and fostering trust, an essential foundation for effective team work. If you can’t do it, it’s not the end of the world (focus on doing some virtual team building). But if you can get the team together, use the time to help team members get to know each other better, personally and professionally, as well to create a shared vision and a set of guiding principles for how the team will work. Schedule the in-person meeting early on, and reconnect regularly (semi-annually or annually) if possible.

However, there is one final point that I have not seen listed anywhere else, and that is food. When I work from home, I can make my own meals, and share them with whoever else is around: my kids if they don’t have school, my wife if she is also working from home, or friends who might be taking their lunch breaks at the same time as me. 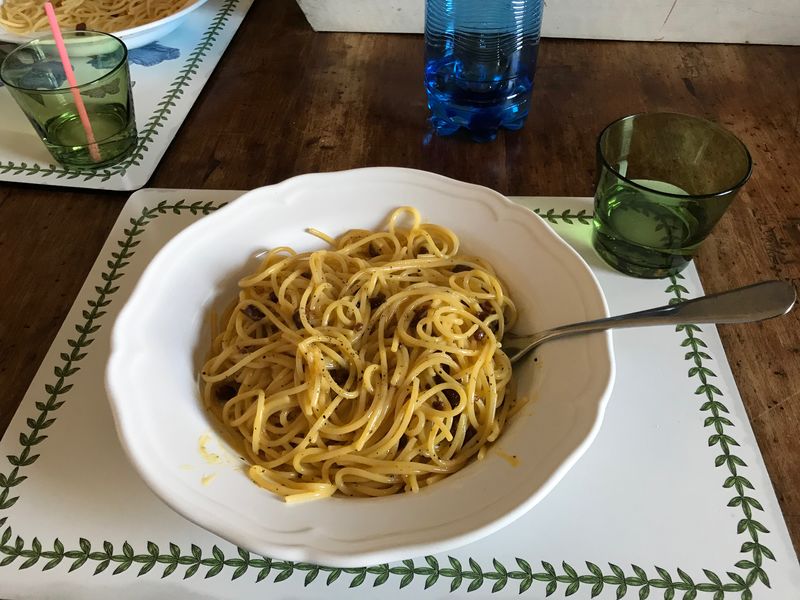 What do you think? Beats a soggy sandwich at your desk, right?