So there’s an Apple ad for the iPad Pro out there, which is titled "What’s a computer?". It’s embedded here, in case you’re like me and don’t see ads on TV.

tl;dr is that the video follows a young girl around as she does various things using her iPad Pro, signing a friend’s cast over FaceTime and sending a picture of it via Messages and so on. 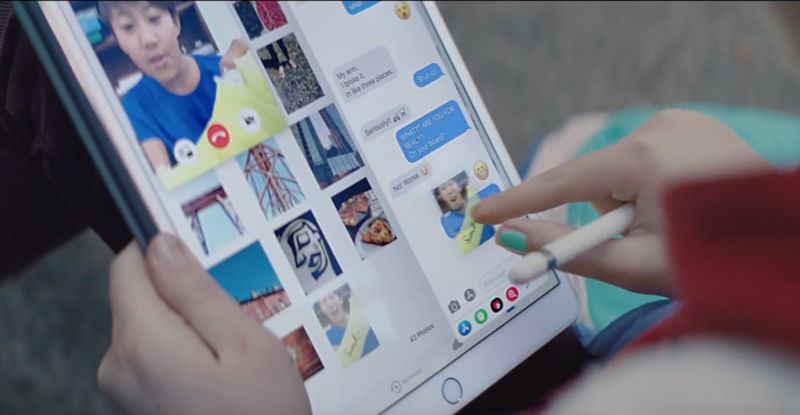 It’s all very cute and it highlights the capabilities of the iPad Pro (and of iOS 11) very well.

However, there is a hidden subtext here, that only young people who grow up knowing only phones and tablets will come to think of them as their only devices in this way. Certainly it’s true of my kids; I no longer have any desktop computers in the house, so they have never seen one. There is a mac Mini media server, but it runs headless in a cupboard, so it hardly looks like a “computer". My wife and I have MacBooks, but they’re our work machines. My personal device is my iPad Pro.

My son actually just started computing classes in school this year, and was somewhat bemused to be faced with an external keyboard and mouse. At least they’ve moved on from CRTs since my day…

There is another group of users who have adopted the iPad enthusiastically, and that is older people. My mother used to invite me for lunch, and then casually mention that she "had some emails" for me to do. She would sit across the room from the computer and dictate to me, because she never felt comfortable doing anything on the infernal machine herself.

Since she got her first iPad a few years ago, she has not looked back. She is now a regular emailer – using the on-screen keyboard, no less, as I have not been able to persuade her to spring for a Pro yet. She surfs the web, comments on pictures of her grandchildren, keeps up with distant friends via Skype and Facebook, and even plays Sudoku.

That last point is particularly significant, as for people who grew up long before computers in homes, it is a major shift to embrace the frivolous nature of some (most?) of what we do on these devices.

None of this is to say that I disagree with Apple’s thesis in the ad. When it comes to computers, my own children only really know iPads first-hand. They see adults using laptops occasionally, and of course spending too much time on their phones, but they don’t get to use either of those devices themselves. As far as they are concerned, “computer" might as well mean "iPad".

I just think that they should do a Volume Two of that ad, featuring older people, and perhaps emphasising slightly different features - zoomed text, for instance, VoiceOver, or the many other assistive technologies built into iOS. Many older people are enthusiastic iPad users, but are not naturally inclined to upgrade, and so may still be using an iPad 2 or an original iPad mini. A campaign to showcase the benefits of the Pro could well get more of these users to upgrade - and that’s a win for everyone.