John Moltz points out that Apple has been doing wearables for over a decade:

Much like today’s wearables, it was a huge success. They sold literally dozens of them.

t a one-off, either: [Ermenegildo Zegna did their own version](

http://www.engadget.com/2006/10/13/ermenegildo-zegnas-ipod-ready-ijacket/ “
Ermenegildo Zegna's iPod-ready iJacket
" ), much better looking and of course at eye-watering cost. I saw one of these in a shop, and it did look very good, but it cost more than my first car, so I passed. 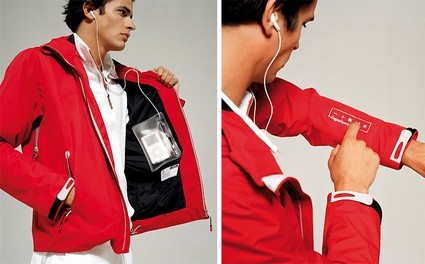 Apple and their partners have had actual products in the market for a decade. Google shows a bunch of vapourware, and they get all the press without having to deliver anything…

All this is to say: wearable tech isn’t exactly new. My own experience: after spending a couple of years with activity trackers on my wrist, I have reverted to using my iPhone for that. I also like nice watches - almost the only form of jewellery men can wear - and don’t plan on giving up any of mine just to get notifications on yet another screen. I may be wrong, but in a world where watches and even jackets last longer than smartphones, I can’t see any reason for wearables to take off.