Today at the Geneva International Motor Show, Apple announced CarPlay, with is the new name for "iOS in the car". It looks great! 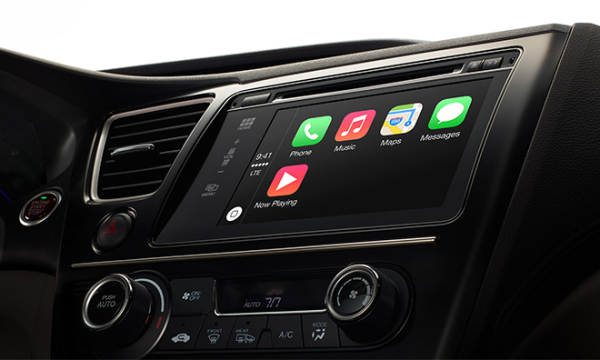 They are pitching it as "a Smarter, Safer & More Fun Way to Use iPhone in the Car", and I love the concept. We upgrade our phones every year or two, but our cars much less frequently than that. In-car entertainment systems are limited by the automotive industry’s product cycles, so they are basically already obsolete (in consumer terms) by the time the car hits the showroom. Enabling cars to piggy-back on the smart, GPS-navigating, voice-recognising, music-playing computers that we already carry in our pockets can only be a good thing.

If you take a look at a video of CarPlay in action, though, I see one huge issue.

Touchscreens in cars are a terrible idea. Old-school controls gave drivers haptic feedback: if you turn the dial one notch, you feel the click, and you get the next radio station, or one increment of temperature, or whatever it is. This is something drivers can do completely blind, without taking their eyes off the road.

It’s been at least a decade since cars could accommodate physical controls for all of their functions, so multi-function control systems like iDrive, Comand or MMI were introduced to help with the plethora of systems and settings that modern cars require. All of these systems allow users to navigate hierarchical menu trees to control in-car entertainment, navigation, and vehicle settings.

These systems are still better than touchscreens, though, because at least the driver’s hand rests on the one control, and that control still has tactile increments to it. The haptic feedback from those clicks is enough for seasoned users to be able to navigate the menu tree with only occasional glances at the screen - very important at highway speeds.

Touchscreens are terrible for non-visual feedback. Users have no idea, short of looking at the screen, whether their action achieved the result they wanted or not.

Apple’s suggestion of using Siri is not much of a fix. I like Siri and use the feature a lot in my car to dictate e-mails or messages, but it depends entirely on network access. Out of major cities - you know, where I take my car - network access is often insufficient to use Siri with any reliability, so drivers will almost certainly need to use the touchscreen as well.

I really hope that CarPlay also works with steering-wheel mounted controls, as those allow control with an absolute minimum of interruption. If we could have audio feedback that did not require network access, using the existing Accessibility text-to-speech functionality in iOS, that would be perfect.