This morning I found an interesting promoted tweet in my timeline. I added some magnification around the bit that caught my attention: 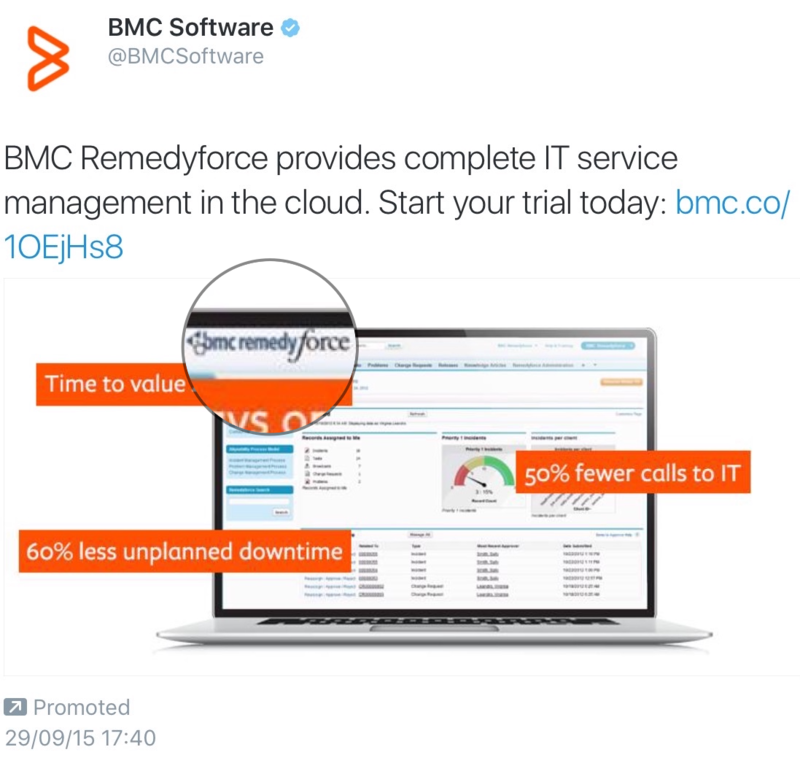 This isn’t interesting so much because of the subject matter - I no longer work for BMC, and even when I did, I had very little to do with Remedy. It’s the logo there, in the magnified area.

Notice how it’s different from the logo at the top of the tweet? The orange one is the new BMC logo, while the blue one is the old logo. The rebranding happened more than a year ago, and though it takes time for a change like that to make its way through all the products, Remedyforce has indeed been rebranded. However, even the product page is confused, with an outdated screenshot (looks like the same one as in the tweet) at the top of the page, but a link to a demo in the sidebar that uses a rebranded screenshot.

This sort of thing happens all too often in large companies, as generalists simply cannot keep up with everything and delegate to specialists. The results, however, can be ugly, as in this case. The web and social media teams are now far removed from people who actually know and understand the products that they are pushing, so they end up using screenshots that may be a year old without even realising it. Worse, maybe they do realise it - web design people may well pick up on the different logos - but don’t have any channel to request updated screenshots in a timely manner.

At startups people care deeply about what they are doing. I’m sure there are exceptions, people who are just in it for the gamble and the hope of a big payoff on IPO day, but by and large people join startups because they care about solving a particular problem. I just read a fantastic piece by Steve Albini on this very topic:

In this environment, everyone is close enough to everyone else, and is emotionally invested enough, that things like this should not happen.

So what? It’s just a screenshot!

It’s never “just" anything. It’s a symptom of a way of doing things. In a big enough organisation, this sort of disconnect happens all over. R&D gets out of touch with what customers are actually using the products, or what they expect from the next version. Finance has no view into how customers like and expect to pay for the products they use. This is how disruption happens and keeps on happening, even though by this point everyone knows at least the Twitter version of the theory.

I’m not picking on BMC in particular1, it just happened to be the example that caught my eye today. I know the web and social teams there, and I know they will be mortified when someone brings this to their attention, and work hard to fix it. The problem is not with the people or their professionalism; the problem is with the structure they are placed into.

This gives me the opportunity to trot out one of my favourite quotes:

"A human being should be able to change a diaper, plan an invasion, butcher a hog, conn a ship, design a building, write a sonnet, balance accounts, build a wall, set a bone, comfort the dying, take orders, give orders, cooperate, act alone, solve equations, analyze a new problem, pitch manure, program a computer, cook a tasty meal, fight efficiently, die gallantly. Specialization is for insects."

History has shown over and over that massive centralised command and control looks good in theory, but tends to get messy in practice. The way things work best is not with massive, monolithic structures that attempt to do everything. Instead, look for small teams of people who own and care deeply about every aspect of something, and make it easy for them to work well together.

Today this sort of focus is easier than ever, as the technical underpinnings are there to enable good integration between different services. The technical term is “composable services". Take an example: I work for a startup, but we still need to do expenses. However, we didn’t build or buy some creeping Orrible thing; we contract with a third-party vendor who takes care of that. They give us a fantastic app that we can use to take pictures of receipts; then the app OCRs them, we tag them, and we get reimbursed. It’s fantastic.

Same thing with travel: we have a service that takes care of all of that, giving users a pleasant experience while delivering low prices (I checked) and compliance with company policies. 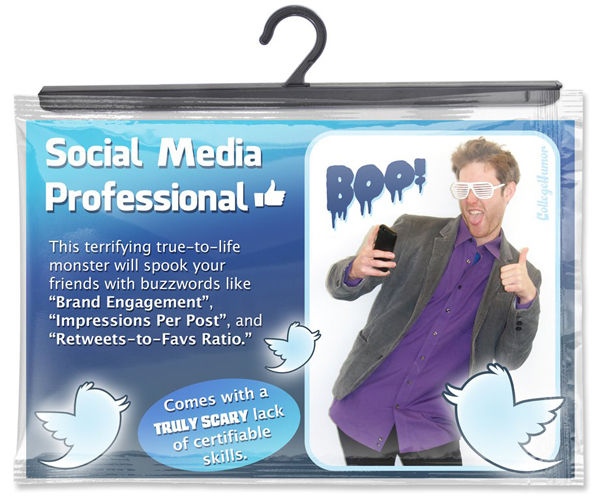 Wait, didn’t you just undermine your own argument?

It might look like I just contradicted myself. I started out railing against the separate web and social media teams that are too far away from the product teams, but still within the same company. Then I started praising actual external companies, that aren’t even under the same company umbrella! So which is it: is specialisation good, or bad?

The key difference is in the Steve Albini quote above. People who care deeply about something focus on that one thing. The people at our travel service care deeply about that, and when I had some questions during the early days of adoption, they were answered rapidly and in a way that made it clear to me that I was dealing with someone who really cared and knew what they were talking about, not someone who was just going through the motions or delivering against a number they had been given.

Social media represent the public face of an organisation. Handing that over to professionals may seem like a good idea, but ultimately it’s a self-defeating move. Most social media pros are good at social media. If you go looking for advice about how to get more reach for your blog posts or whatever, you quickly find that it’s all inside baseball: people using social media to promote their blogs about social media, so they can attend events about social media and discuss the nuts & bolts of social media.

If you want your social media efforts to be effective, everyone in the company should be doing it, not a small nominated group of pros. This is the only way you can get real engagement and true conversations going.

Reaction to this post - from my own wife, no less - in a follow-up here.