I have a liking for terrible puns, so I have always had a soft spot for the analyst firm Horses for Sources. Their latest newsletter included a link to a blog post which I'd meant to write up the first time around, but got distracted… ooh! A squirrel!

Here's the piece: Time to stop the buzzword balderdash and become meaningful again.

Am I smoking something illegal, or has our industry really started to lose the plot with the amount of buzz terms that – quite frankly – only mean something to the sellers and advisors trying to make their wares sound that little bit savvier than their competitors. And even then, I am not too sure whether many of them even fully understand what they are buzzing about either, more simply regurgitating what their competitors are saying.

They also provide a table of examples, which really doesn't look good for anyone talking about SMAC1: 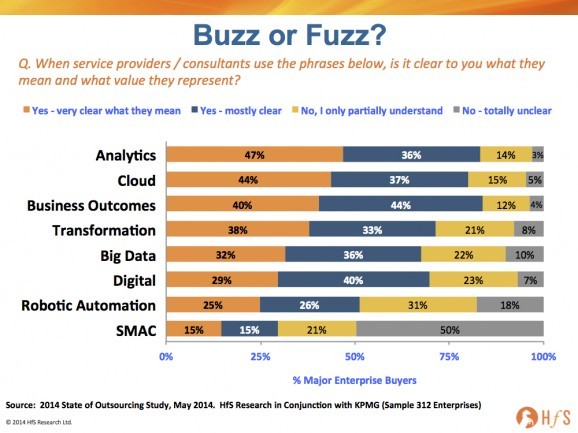 I don't think the problem is with people parroting their competitors. Rather, in each company the "thought leaders" come up with terms like DevOps, cloud, or, yes, SMAC, and they mean something specific by them. Over a period of time when they are hashing out their concept, they develop these sorts of verbal shorthand to refer to quite complex structures.

When these deep thinkers are communicating the concept to outsiders, sometimes – often – they forget to provide the extended definition and associated context. Their audience of sales people and other front-liners half-understand the concept, learn the shorthand by heart, and end up in front of customers regurgitating poorly understood messages. The result is basically cargo-cult marketing.

The problem is not that the various visionaries have their own jargon, or even that they talk in acronyms. The problems begin when they come down from the mountain and forget to translate that jargon into common language. The point is not to sound smart to people who don't understand the concept, but to communicate that concept.

A theory that you can't explain to a bartender is probably no damn good.
--Ernest Rutherford