Today’s ride was along part of the old pilgrim route from England through France to Rome, the Via Francigena. There is still a ferry crossing for the use of pilgrims at the Guado di Sigerico — and yes, Italian speakers will be jumping up and down at this point because "guado" means ford, but there is no ford there in modern times, just the ferry. Sigeric himself was an Archbishop of Canterbury who made the pilgrimage down to Rome for his investiture, and someone in his party documented the return leg.

More than a thousand years after Sigeric, it’s still quite common to meet pilgrims walking or cycling the route; it’s also part of the Europe-wide Eurovelo cycling network, as route EV5, appropriately enough named Via Romea Francigena. Sensible pilgrims however avoid setting out at the fag-end of the year, with only single-digit temperatures and overcast skies to look forward to, so today I had the road to myself.

There are still a number of chapels along the route around here, although I suspect they were more for the benefit of farm-workers rather than pilgrims; those tend to stop in towns and cities, just as they always did. Since the advent of mechanisation in farming, most of these field-side chapels are in poor repair. There are no longer armies of farm workers to gather for celebrations in the fields, just the odd tractor — and not even any of those at this time of year. 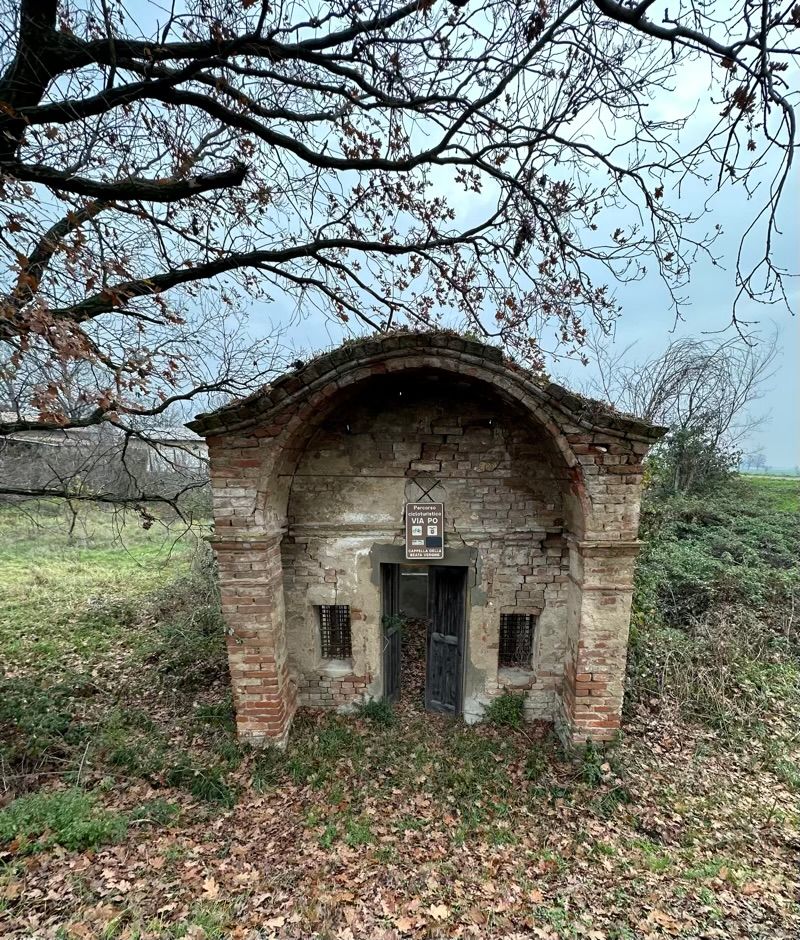 This particular chapel looks structurally sound from a distance, but as you approach the door, you realise that there is quite a lot of light making its way inside — more than those tiny grated windows could explain. 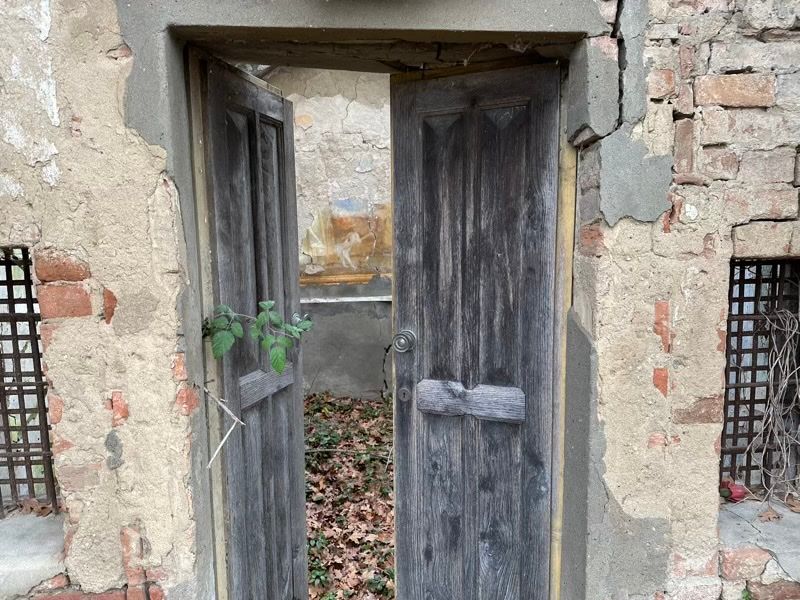 Sure enough, the roof fell in at some point. On the plus side, this means we can see the remains of the interior frescos a little better. 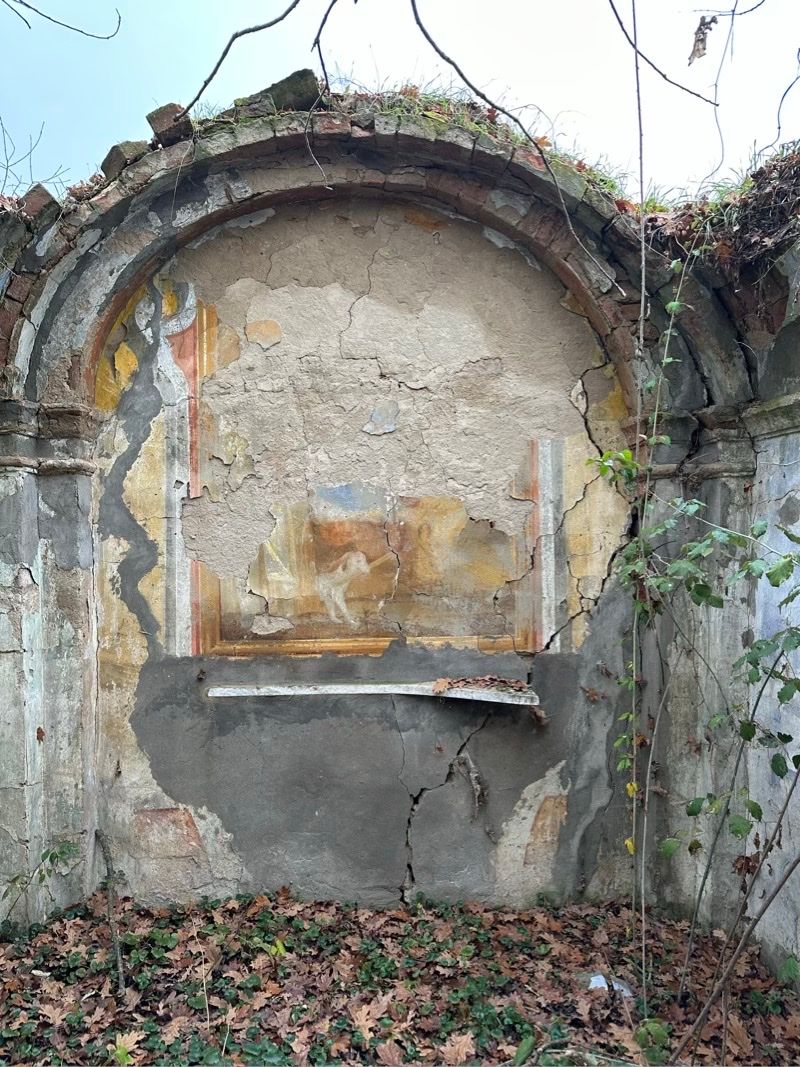 This is not the only lonely chapel I found today. Not needing the ferry across the Po, I left the pilgrim route at the mouth of the Tidone river and joined the Sentiero del Tidone, which runs along the banks of the eponymous river all the way from its source up in the Apennines down to its confluence into the Po, near the Guado di Sigerico.

This ruined farm-house had a little chapel beside it that someone had gone to some effort to clean up and revive. 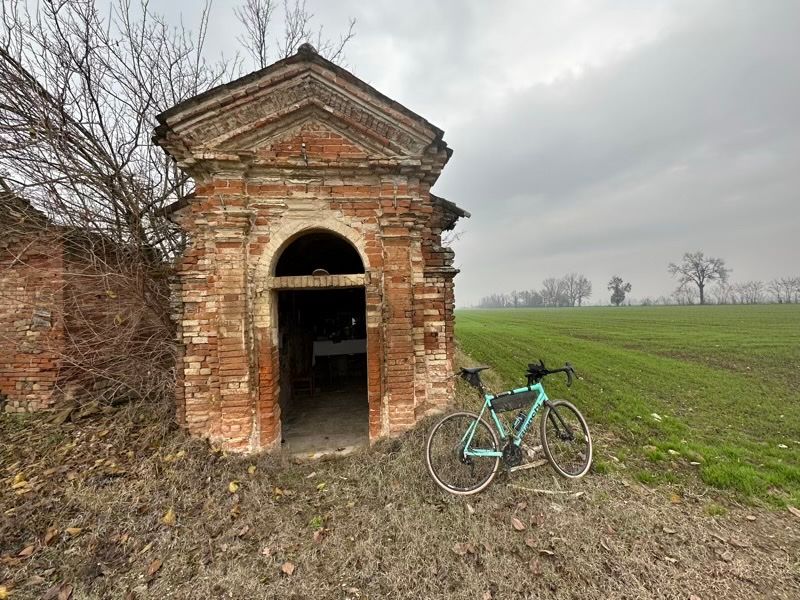 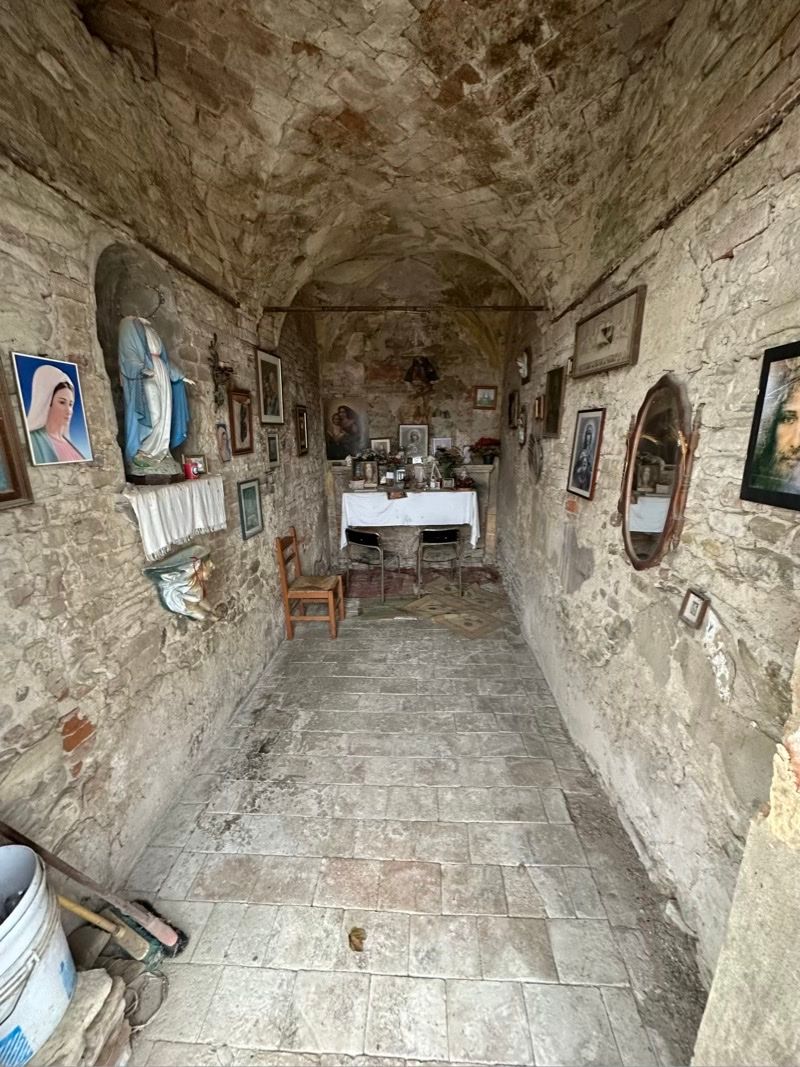 This site is a little closer to a main road and still-occupied farms and hamlets, which maybe gives it just enough passing traffic to hang on as a just-about going concern? Or maybe the maintenance of this half-ruined chapel is one person’s project, giving the old building one last lease on life.

Of course on a late-December day these ruins could not help but look sad and brooding. They did not make the same melancholy impression on me when I last came through here in September, with a background that was green, growing, and sunlit, rather than muddy ploughed fields under lowering clouds.

Anyway, I got my miles in, and some thoughts out of my head, so I’m happy with that. Any ride is a good ride!