On my third trip to Bilbao, I finally made it to the Guggenheim. It's a fantastic building, and being set in a rather drab town (sorry, Bilbainos!) only enhances the contrast of the shiny titanium curves of its exterior. 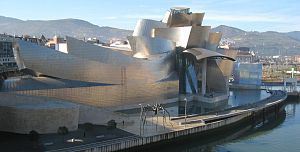 Many people had told me that the draw was mainly the building itself, and the art collection was so-so. However I had a couple of hours free on this trip, and since I was staying in a hotel literally across the road from the museum, I would have felt guilty if I had passed up the opportunity to look around one of the most famous museums in Europe. 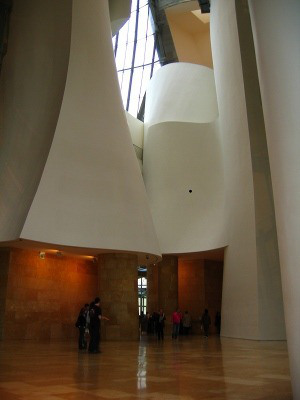 The first impact is very positive. The atrium is just as spectacular on the inside as it is on the outside. There are also a couple of curvilinear terraces jutting out from the facade and into a water installation - something about fog, I gather, but the pool was drained on my visit. There were some outdoors sculptures, though - colourful oversized chrome tulips by Jeff Koons (who else?) and another chrome sculpture by Anish Kapoor. 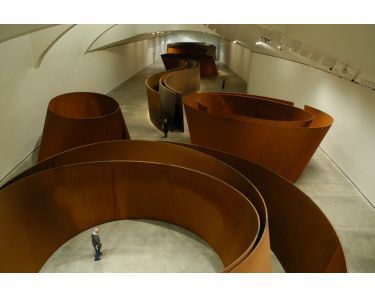 The ground floor galleries house selections from the Guggenheim's permanent collection, plus a large space dedicated to a series of installations by Richard Serra, entitled The matter of time. The Serra installation is actually fascinating: a series of complex steel shapes, formed by the projection and intersection of ellipses, spheres and tori. Visitors walk through these huge curving or spiralling shapes, and the changing radii together with the isolation from the rest of the gallery combine to induce disorientation and even, in some cases nausea. I was certainly disoriented by some of the spirals, although the most famous Snake was perhaps less impressive in combination with the other pieces than it would have been on on its own. 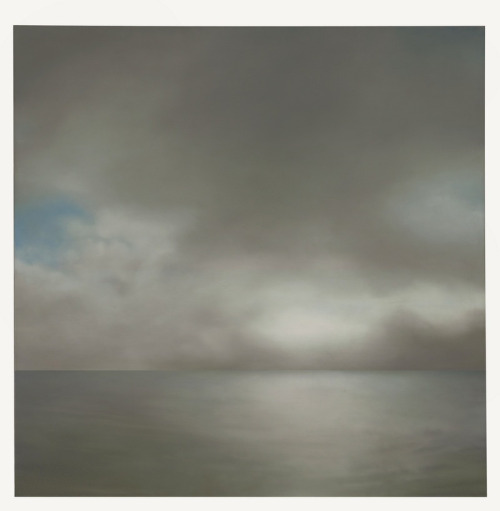 As for the collection, I fell in love with a piece by Gerhard Richter, entitled Seestueck (Seascape). Richter has painted an apparently traditional seascape view, but looking at it more closely reveals the sort of movement and blur artifacts that a photograph might contain - all exquisitely rendered in a hyper-realist style which makes Richter's work a true commentary on visual perception, not just an abdication of ability and training. 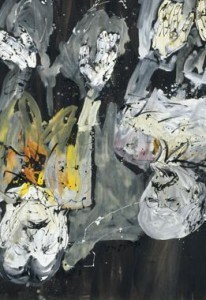 I was less enthralled by a series of fourteen paintings by Georg Baselitz, all variations on the same subject and sharing the title Mrs Lenin and the Nightingale. Described as "a masterpiece of European painting", the series left me distinctly underwhelmed, to the point that I took a single turn around the room and left. Much was made of the materials and of the fact that Baselitz apparently paints with the canvas upside-down or with his feet. The results do not argue in favour of this method.

The same contrast as I found between these two artworks was on display upstairs, where the entire floor had been given over to an exhibition on Hockney. This was my first time viewing Hockney paintings de vero, and I had tried to refrain from judgment until I had done so because I had understood that the scale was a large part of the appeal of the pieces. However, the only advantage that the large (in some cases, very large) scale brought to me was that it was easier to appreciate the composition from afar, without being distracted by the frankly juvenile technique and colour palette up close. Nowhere was this made more clear than in the room given over to variations by Hockney on the 17th-century Sermon on the Mount by Claude Lorrain. In a fit of misjudged bravado, the curators had hung the original side by side with Hockney's attempts to replicate it. The results did much to reinforce my existing preference for pre-modern painting, as the technique, composition, and evident anatomical study which had gone into the earlier work were entirely missing from Hockney's garish and over-sized caricatures.

The third floor was closed at the time of my visit for the preparation of a series of architectural installations, which unfortunately also meant that I was unable to visit a small collection of Schiele. The fact that visitors were not informed up front that both the fountain installations and one-third of the interior galleries were closed was less than satisfactory on the part of the Guggenheim's management, but the entry fee was reasonable enough (eight euros) that I felt that I had got my money's worth, regardless.

What I saw at the Guggenheim Bilbao reinforced my previous opinion that painting as an art form is in serious trouble. Large-scale installation such as Richard Serra's and Jenny Holzer's are often striking, while contemporary abstract sculpture often plays with light and texture in fascinating ways. Other pieces like Joseph Cornell's found-object boxes defy easy categorization, but remain entirely original. Painting, though, appears to have become unmoored from culture and generally accepted notions of beauty. Nowadays artists like Baselitz seem to take perverse pleasure in their ability to

epater la bourgeoisie; the problem is that while this might have been worth doing a hundred years ago, these days the bourgeoisie is quite capable of getting its shocks on its own. The art world therefore is at risk of turning into a completely self-referential clique which is simultaneously baffled and secretly pleased at the disinterest with which the public treats its members. If institutions such as the Guggenheim - and indeed the artists whose works are exhibited there - are to survive as anything other than a desiccated carcass hinting at former glories, they will need to engage with this disconnect and address it head-on.