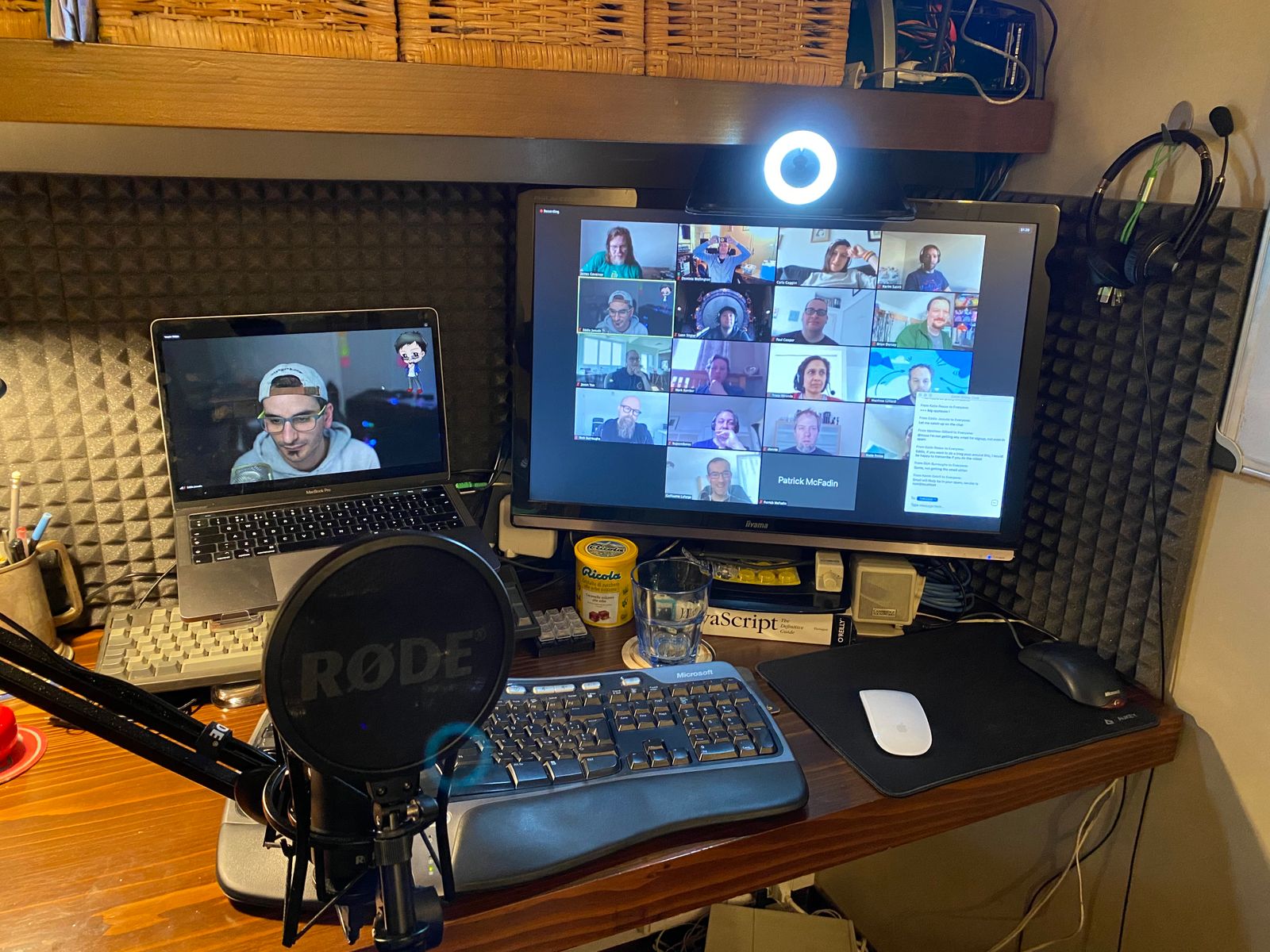 Inspired by Eddie Jaoude, I made some updates to my home office setup. Just like everyone else, I have been on a ton of calls and a couple of podcasts too, so I kept myself entertained — and the economy moving — by upgrading my work environment.

In the foreground is my Røde NT-USB microphone, with shock mount, pop shield, and boom arm. That last is especially useful so I can swing the whole rig back out of the way when I’m done with it.

Behind that, you can see my Microsoft Natural keyboard; I get RSI if I type too long on straight keyboards, like my laptop’s for instance, so when I’m at my desk I use the Natural which lets me keep my wrists straight.

I use an Apple Magic Mouse, and I know some people hate it. It’s true that it’s not the most ergonomic thing ever, but I love the gestures on it, and I don’t actually use my mouse that much; it’s all about the keyboard shortcuts for me. This also means that I only have to deal with the silly recharging setup quite rarely.

The screen is an Iiyama 26". It’s only HD, not 4k, so it’s probably the next thing due an upgrade. I was hoping Apple would get around to releasing one of its lovely 5k screens without an entire iMac attached, but that is looking increasingly less likely. The LG 5k screen is just too ugly for words, especially for the price, so I’ll probably blow my next bonus on a nice 4k screen. What else am I going to spend money on right now, anyway?

On the walls are generic sound-absorbent foam panels. They really do make a surprisingly audible difference compared to bare paint — nearly as much as moving from the mike on the little headset that’s hanging beside the monitor to the big Røde!

Nestled under the monitor is one of my ancient Cambridge Soundworks speakers and its volume controller; you can just about see the subwoofer under the desk. It’s a four-speaker (plus sub) setup, but right now I don’t have the rear two wired up, waiting for a USB sound card with front+rear outputs that is on a very slow boat from China.

On top of the monitor, the bright ring of light is my Razer Kiyo webcam with built-in ring light. My office is in a half-basement, and the desk is in the darkest corner, so I need all the help I can get.

The computer itself is a MacBook Pro 13" with Touch Bar. Personally, I like the Touch Bar, although obviously I don’t use it much when the MBP is on its stand like this!

The keyboard under the stand belongs to the computer you can just about see above the monitor — yes, that’s a computer! The keyboard has blank keycaps for that William Gibson hacker look, while the computer is in a Skeleton "case" from Antec which is pretty much just an open frame to mount components in, plus a big slow fan to blow air over everything. It’s perfect for what is basically a parts-bin computer. It runs Debian and lets me mess around without the risk of doing something silly on my work computer.

The wicker boxes beside the Skeleton are all full of ancient tangled cables. Because of course they are. 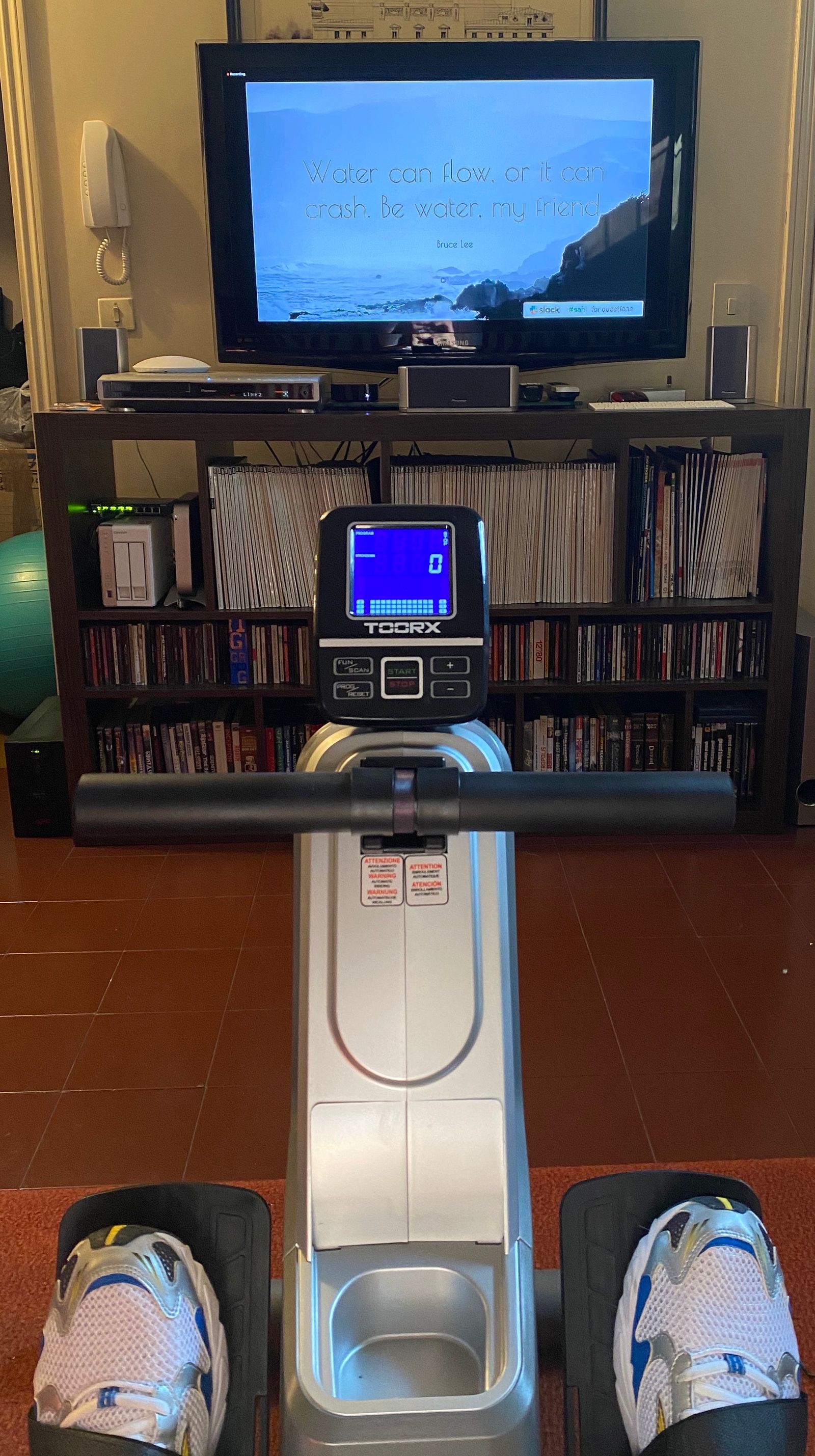 This is the other half of my home office, with a rowing machine set up in front of a TV with an Apple TV attached. This lets me stream webinars via AirPlay and watch them while I get a workout in. Good for a change of pace in between all the Zoom calls! 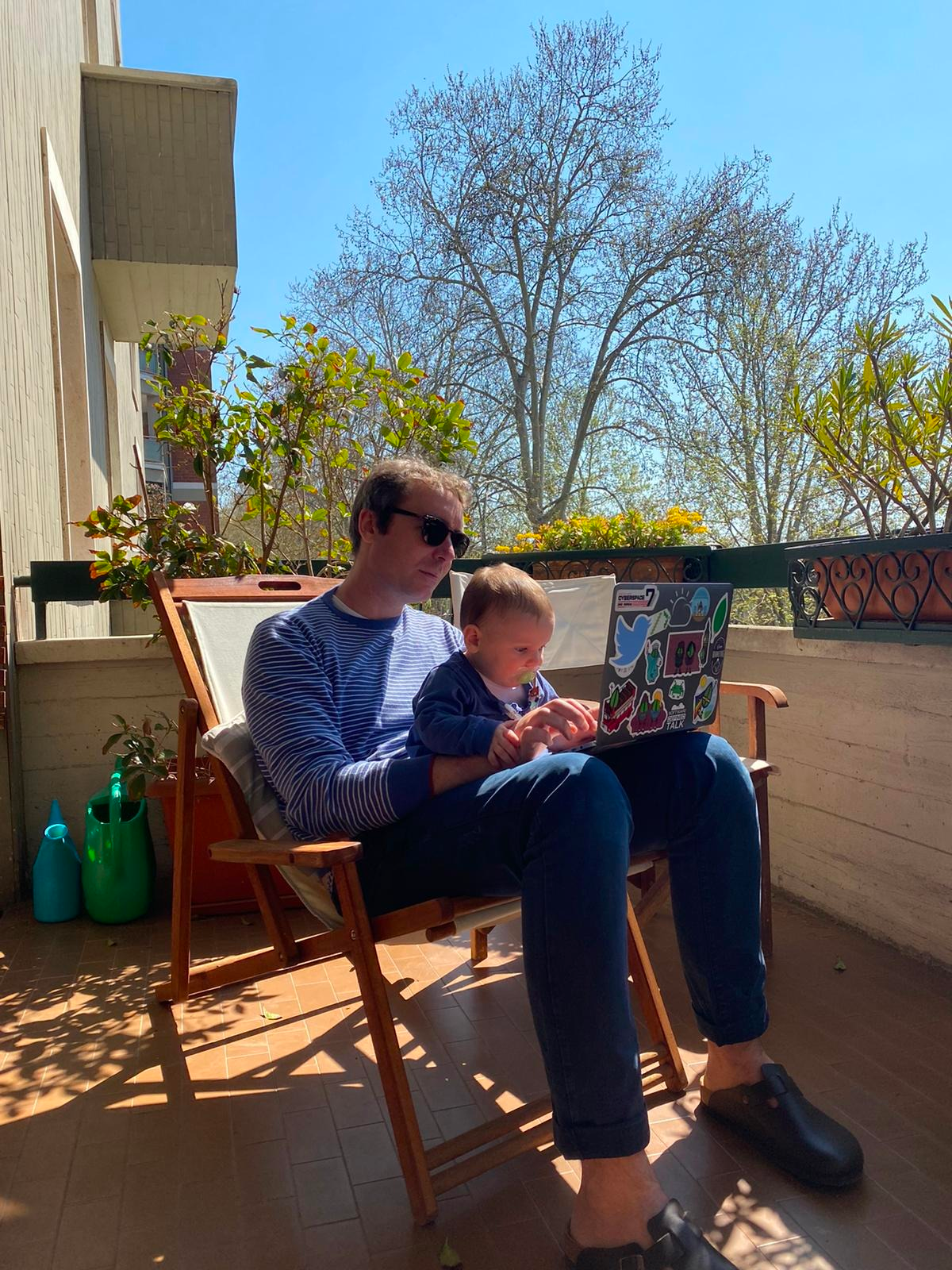