In Piacenza, near where I used to live, there is an old building that looks like an abandoned garage or something along those lines. The area is right on the border between the upper town, with the palaces of the various noble families, and the lower town, which was historically more working-class. 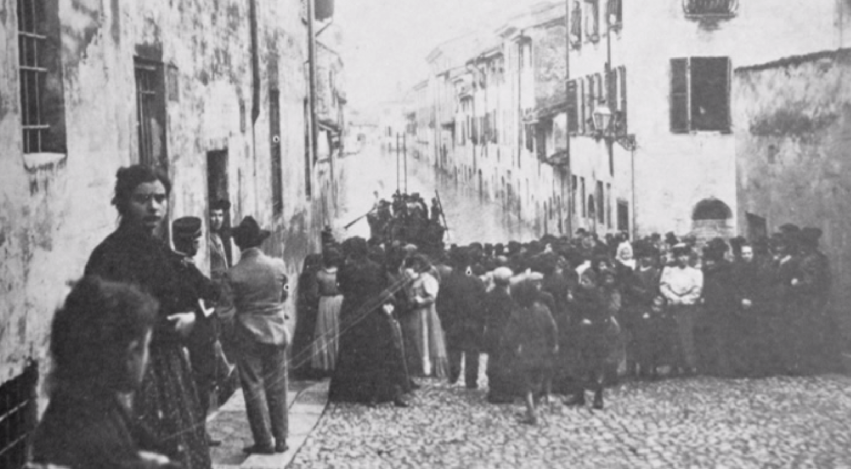 This is a historical photo of the Muntà di Rat, courtesy of the local newspaper, Libertà. As you can see, "lower" is not a metaphor! I used to live on the street at the bottom, at a right angle to the focus of this photograph. While the area no longer floods, everything else is almost exactly the same. 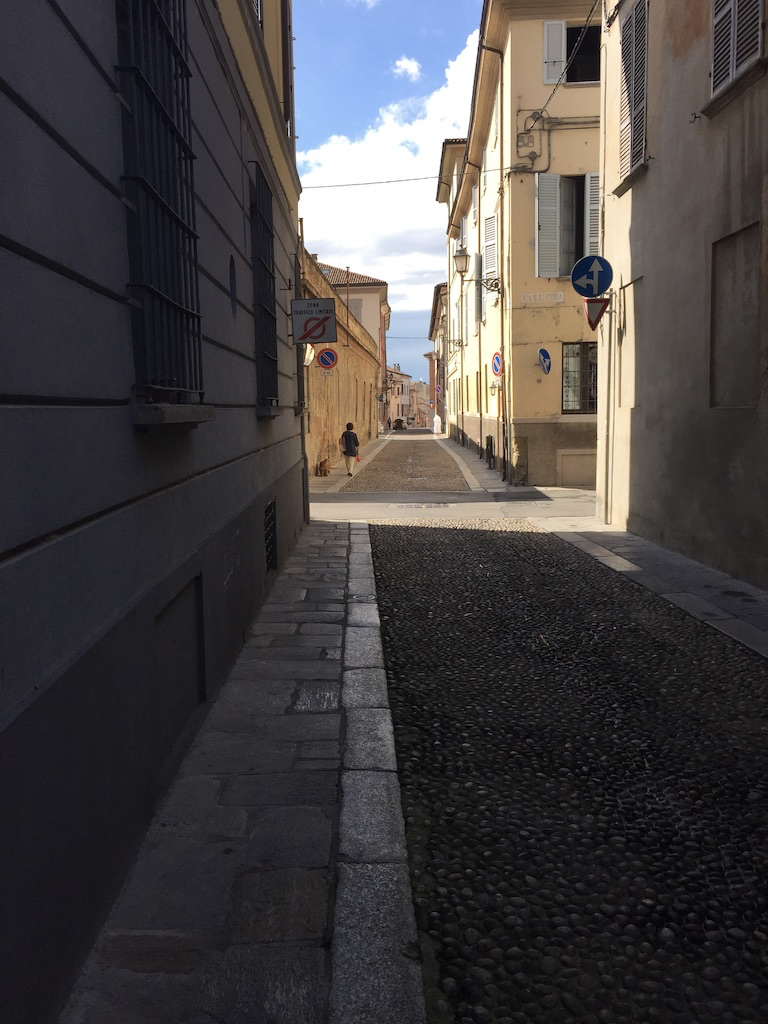 Here is a more recent photo, this one taken by me. The Muntà di Rat is at the end of the street, while the mysterious old garage-like structure is on the left, where the lady is walking. I had always idly wondered what it was, and how come it was left abandoned in the middle of town — but then again, it was in good company. Between generational turnover and changes in the real-estate market, there were several abandoned buildings in the area. Some were parts of well-known, soap-opera-style tales of multigenerational family intrigue and inheritance disputes, while others were more prosaic stories of light industry moving out of a residential area.

Now a story in the Libertà finally resolves the mystery: it's an old depot for commercial products imported from Italy's colonies in Libya, Ethiopia, and Somalia. 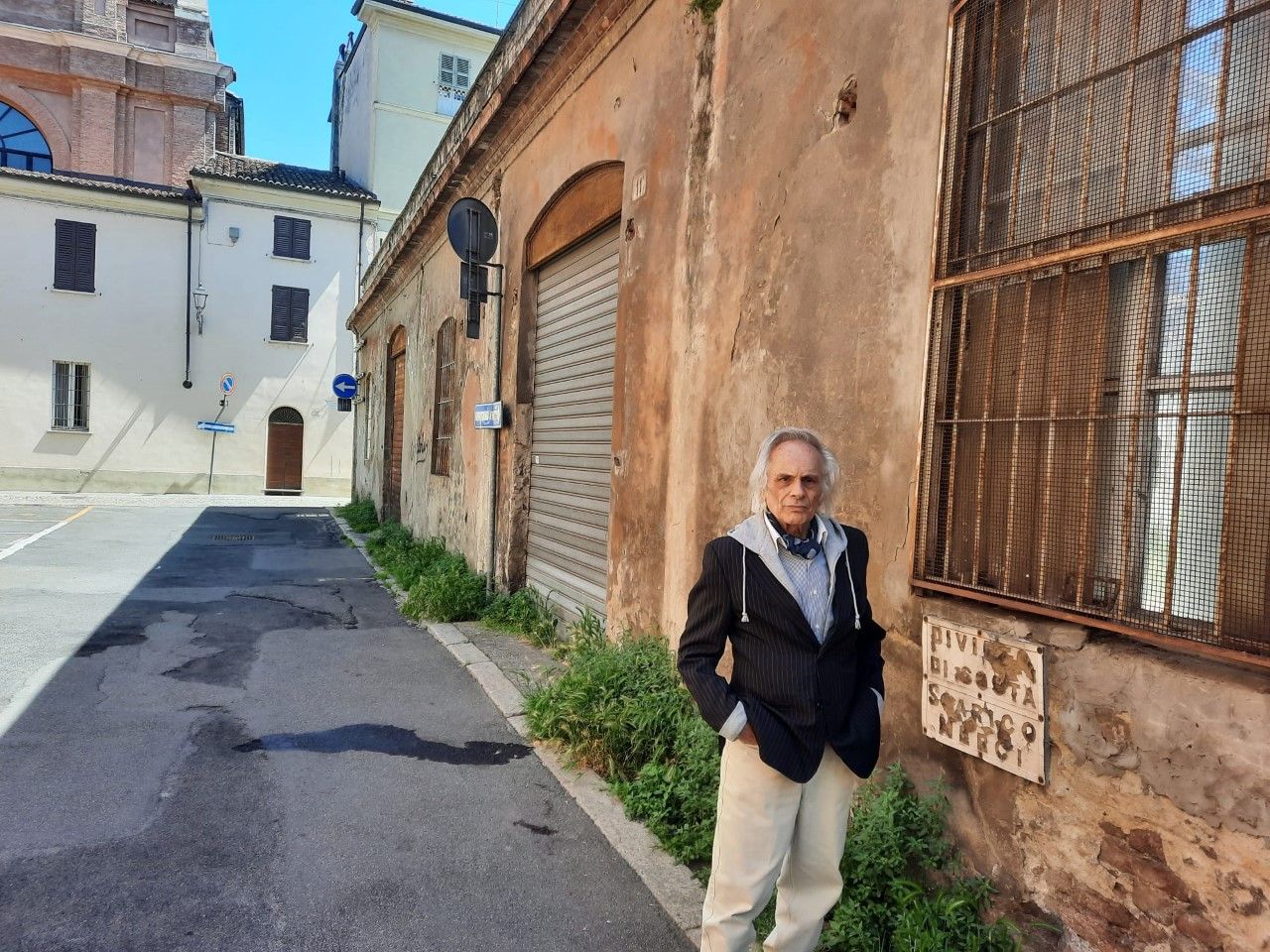 Reading something like that is a punch in the gut. Italy had such a relatively minor history of colonisation in the 20th century that it is often entirely forgotten. In fact, many Italians consider themselves to have been "good guys", not like those other colonisers, despite some equally shameful actions:

It’s estimated that during the 60 years of Italian colonialism, almost 1 million people died due to war, deportations, and internment. In the 1920s, when the Italian Army started a military campaign to recapture the Libyan territories controlled by rebels, they resorted to widespread summary executions, torture, and mass incarceration. To crush the Libyan resistance, in 1930 the Italian general Rodolfo Graziani, nicknamed "the butcher of Fezzan," put the civilian population in concentration camps. In Ethiopia, the Fascists deployed chemical attacks. When Ethiopian rebels tried to kill him, in 1937, Graziani had 19,000 Ethiopian civilians executed in retaliation.

Italians understandably prefer to refer back to the glories of Rome, or perhaps the Renaissance. Anything from the unification of Italy (which only occurred in 1871!) onwards is brushed over in school and rarely referred to afterwards. The Fascist period is known, of course, and outside of some unfortunate fringes, still a taboo subject.

But colonies? That's something other countries did.

A small example: there is a bar in Milan, unironically called the Colonial. It's meant to evoke a certain type of South-East Asian decor, perhaps along the lines of Raffles Hotel in Singapore — and evidently nobody ever thought twice about that name.

All of this forgetting was possible because Italy had never been a nation of immigrants, but rather of emigrants. The Scalabrinians are a religious order that was founded right here in Piacenza at around the same time as Italy was beginning its colonial adventure. The order's mission was specifically to support Italians emigrating to North and South America. Other emigrants went to France or to the coal-fields in Belgium, and to this day the summers see the roads in the hills fill back up with cars with French and Belgian number plates. If anyone in Italy thought of immigration in the mid- to late 20th century, it was in the context of people from Southern Italy moving to work in the factories of the North.

In the 90s, people started coming to Italy from Africa — and many of them settled down, and started having families. Now their children, the second generation, are here. They were born here, they went to school here, they speak correct and unaccented Italian, and they demand to be acknowledged.

It's not possible to ignore these proud new Italians, when we are surrounded by reminders that they did not manifest out of thin air, and that instead there is a long intertwined history. Now Italy finds itself wrestling with questions of identity — what does it mean to be Italian — which were already difficult in such a diverse1 and politically young country, and just got a whole lot more complicated.

That old warehouse stands (only just) as a reminder of the places and people that were broken so that cheap goods could be shipped to a depot in the centre of town. The past is not dead; it's barely even past yet.